Looking for a way to master chord voicings? Howard Rees has a plan for you.

Everyone wants to get the most out of the limited amount of time they get to spend alone at the keyboard. At any point in your development as a keyboard player, there are dozens if not hundreds of different directions you could choose to explore. How do you decide which way to go to maximize that precious practice time?

The more you understand about the relationships that musical elements have to one another, the easier it will be for you to spend your practice time learning the things that will be the most useful to you. When you begin to see how one chord form can be applied to keys and contexts you may have overlooked, you can then work on multiple elements simultaneously. And the more you understand about the relationships among elements, the easier it is to apply them to create new sounds, voicings, compositions, and ways of soloing.

For instance, I can remember a time when I didn’t know that a minor 7th chord could be thought of as occurring on the 5th degree of a dominant 7th scale. Making this realization opened my eyes to the fact that chords come from specific points on scales, and that I didn’t need to think of a different scale to solo over each chord in a tune. It also made me realize that there was something larger going on, and that music was about relationships. Part of our work as musicians is to discover how things are related to each other.

To begin with, take a look at The Dominant Species (see below) to get a basic understanding of where I think musical elements come from. In essence, I think of chords as being derived from dominant scales, each of which is in turn related to three other dominant scales and the chords generated by them. Each set of four dominant chords is related by virtue of having been generated from a single diminished 7th chord. As you can see from the side bar (click the link), there are three diminished 7th chords; each generates four dominant 7th chords. That means we’re covering all twelve keys.

In the examples, I’ve chosen chord progressions that are most commonly found in standard jazz tunes. By structuring your practise time along the lines of what I’ve described in Figure 1, you can begin to experience the close relationship between the dominant 7th chords and scales, you learn to apply them to real-world progressions, and you cover all twelve keys without having to resort to boring Circle of Fifth progressions. You’ll be practising scales with more of an awareness of a larger musical context. And the various ways you’ll find to connect the pairs of scales together wil become part of your own bag of musical tricks. Example 1 shows some ideas on running pairs of dominant scales together; Example 2 suggests how to do this thinking in terms of the major scale. Note that going up and down a scale is a two-bar phase. The octave is omitted so you can stay in time.

The rest of the examples explore the ways that dominant 7th and 6th chords are related, how they work as dominant substitutions for each other, and how they can be combined and added to – all within the context of their shared relationships. The final example, Example 10, shows you how to apply your new skills to tunes.

I hope you’ll find this idea of the underlying structure of scales and chords to be helpful in your practice time. But most important , I hope that it helps you discover new ways of creating sounds that you can use in your own music.

So what would it sound like to follow the practice regimen outlined in the Side Bar ? Starting with Step 1, you might run the C dominant scale over a II-V in F (a). For Step 2, going from C dominant to G flat dominant, you might take a similar approach over the same II-V, and/or a II-V in C flat/B (b, c, and d). Step 3 could be realized in patterns such as those in (e) and (f) shown over a II-V in D minor, and Step 4 might take a simple approach as in (g) over the same progression. Notice that your scale choice doesn’t have to switch right on the barline or the chord change, although it certainly could. This is because of the interchangeability of the four related dominant scales. In (e), for example, I use the C dominant until the very last note; if I had switched to the A dominant on the barline, I would have played an F sharp instead of an F natural. The F in this case becomes a flat 13, a perfectly valid note choice. As you practise running the scales together, experiment with the sound of each of the four related scales over each set of possible changes. Depending on your scale choice, you’ll be somewhere along the continuum that runs from chord tones to altered tones.

As I mentioned in the “Dominant Species” the minor 7th chord is sometimes better approached through its relationship to the major scale. In (a), I use the F major scale over three progressions that are commonly found in jazz. In (b), I show how you can interpret the II of the II-V progression as being a voicing for a I major chord, and stick with the same scale choice over the V chord to hit the extensions, until you reach the 3rd of the V chord. Experiment with these possibilities in the context of tunes.

Here’s a blues in F rendered with basic scale patterns from the previous exercises. Try substituting the related dominant scales to get a sense of how they touch on the altered chord tones.

Now that you’re convinced the four related dominant scales are interchangeable when soloing, take a look at how easily you can combine the associated dominant 7th chords to create altered voicings. Each pairing will have two common tones as well as the two new altered tones introduced by the superimposed chord. The advantage of learning altered chords as related chords voiced together is that the voicings are really easy to invert. Large altered chords can be difficult to play and to remember: Many players wind up learning only a couple of voicings. Grabbing smaller chords also makes it easier to add a rhythmic dimension to your comping.

We’ve seen how to create a dominant 7th chord by moving a single note of a diminished 7th chord. What happens if you move two chord tones down by a half-step? How about moving three notes? It turns out that these moves generate major 6th chords, respectively (a). The conventional voicing applications for such chords are over minor 7th or major & flat 5 chords (b). But armed with the knowledge that every note moved in a diminished chord is a root of a related dominant, you can apply major 6th and minor 6th voicings to their related dominant 7th chords, too. In (c) I apply major 6th chords to a C7 that are from the related dominant roots of A, G flat, E flat, and C.

Here are some ideas for practicing the voicings outlined in the previous examples. In (a), I show how to play the basic voicings in a V-I pattern that you can transpose to every key. In (b) and (c), I suggest two ways to combine arpeggios and scales to create melodic patterns.

Here’s how to get to a new level of flexibility for your voicing adventures. When using major and minor 6th chords as described in Example 6, you can swap chord tones with notes from the diminished 7th chord built on the note one-half step below the root of the 6th voicing. For example, in a G6 chord, you can borrow or substitute notes from the F#dim7 chord – pretty much at your whim. When using dominant 7th voicings, you can substitute or borrow notes from any of the other three related dominant 7th chords. In (a), the Em7 voicing can be thought of as a G6 with an F# and A borrowed from F#dim7, the A7 is voiced with notes from G flat 7 and C7, and the Dmaj7 is voiced with an A6 that swapped an A for a G# from G#dim7. The second measure in (b) uses two different 6th chords over the Fmaj7: a C6 with an A flat and B from Bdim7, and a straight-ahead C6. Every voicing in these examples is either a mixture of notes from a 6th and a diminished 7th chord, or of notes from two related dominant 7th voicings. Play through them to get a feel for the kinds of sounds you can get with this kind of freedom.

Here’s a variety of applications of the techniques we’ve covered in the previous examples. The main ingredient we’re adding here is to take the borrowing and combining and spread it out over time. The four (a) examples all apply the roots of related dominants directly to the right-hand voicings. The minor 7th voicing that occurs on the 5th note of the dominant scale can be used as an effective dominant voicing (b). The (c) examples add notes borrowed from the corresponding diminished 7th chords as well as the roots of related dominants. Additional examples can be found at www.keyboardonline.com

Now let’s apply some of these techniques to some jazz standards: “It Could Happen To You” (below), “My Romance”, and “Stella By Starlight”. Note how the flexibility with voicings that you’ve gained by practicing the preceding examples lets you have voicings under melody notes that you might otherwise not have thought of. 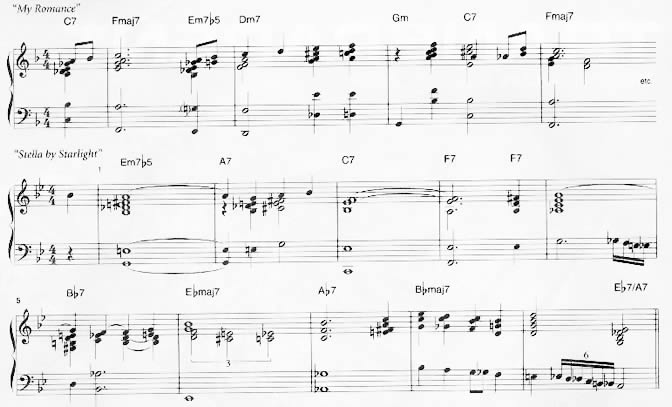